I accidentally clicked on his profile...

Sandy 's Story
I had been single since 2000, seven long years. Over the years I have had many, many dates. I have had lunch dates, brunch dates, dinner dates, hotel lobby dates, theater dates, dinner dates, 20 minute dates, dates that should have been 20 minute dates and countless, endless coffee dates. In the spring of 2006 while browsing on JWed, I came across my Shmuely.
I thought he was really cute, and that we had a lot in common. We both were originally from Brooklyn , divorced with children, and had a love for Judaism. Oh yeah, and I thought he was really cute! We corresponded via e-mail for a little while , really seemed to hit it off, but before long we both acknowledged that due to various circumstances neither one of us would be moving, so we wished each other well and said our goodbyes. Some time had passed, it was a Saturday night, just me and my computer, and I saw that Shmuel was on line.
I accidentally clicked on his profile. When you click on someone's profile they can see that you looked at them. I was horrified. I thought great - now he is going to think that I am stalking him. I was not above stalking, but I didn't happen to be doing it at that very moment.
A few minutes later, I received an e-mail from Shmuel. It was a lovely and warm note. Shmuel wrote that he was surprised that I hadn't already found someone and that he was sure t hat I would find my beshert this year – and he wished me all the best. At that point , I wrote, tell me about Cleveland .
And thus our relationship began. What I have learned from all my years of dating, is that I need two things in a relationship. I need to value the person for who they are and I need to love the way they treat me. One without the other is not enough. In Shmuel I have found both. Shmuel loves and accepts me for who I am. My teacher taught me that life is like a mosaic.
If you are standing very close to a mosaic you can only see what is in front of you and you can not see the beauty of the whole picture. As humans we usually only see that which is in front of us. In it only Hashem that sees the larger picture and knows what is best for us. Sometimes, with time, we are fortunate to get a glimpse of that larger picture. In Shmuel I am finally able to step back and see what Hashem's plan has been for me all along.
Shmuel's Story:
When Sandy and I first started communicating via JWed we connected right away. And connecting really is what it is all about. I looked forward to our daily e-mail chatter. And oh yeah, I thought she was very attractive!
As it turned out Sandy was very happy living in New Jersey and I was not in a position to leave Cleveland . So we said our e-mail goodbyes.
Some time later, I noticed that Sandy had looked at my profile again. I missed "speaking" with her and wanted to write back. But I also thought it probably would not be a good idea since the relationship was not going to go anywhere. In the end I decided to write her a short note just to say hi and wish her well.
I really thought she was a great "catch" and in so many words told her so....The e-mail I received back was short but said a lot. All she said was "so tell me about Cleveland ". The rest , as they say, is history. We maintained a long distance relationship for about a year, traveling back and forth to spend time with each other. I am very happy to say we married in June, and are now planning for Sandy and her son to move to Cleveland this summer.
Thank you JWed for bringing us together! 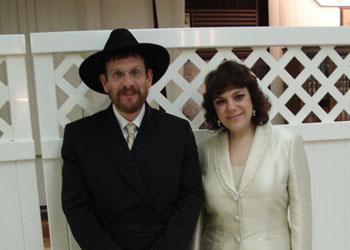